1 hour and 10 minutes from GABASA, the village of Ainsa is located between the Cinca and Ara rivers at a height of 589 metres.

A privileged place between the Ordesa and Monte Perdido National Park, the Natural Park of the Canyons and the Sierra de Guara, and the Posests-Maladeta Natural Park.

Strolling through the old streets of the town, declared a Historic-Artistic Site in 1965, we will enjoy the warmth of its people and the beauty of an environment with a clear medieval flavour.

Its old streets, its castle (11th-17th centuries), the wall and its gates, the Plaza Mayor, the church of Santa Maria (12th century), declared a National Monument, or the facades of Casa Arnal (16th century) and Casa Bielsa (16th-17th century), are a stony summary of the idiosyncrasy of a town with a strong personality and a fascinating cultural heritage.

Back to Places to visit nearby 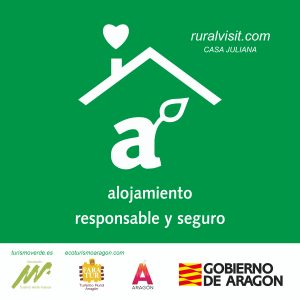 We use our own and third-party cookies to obtain statistical data on our users' browsing habits and improve our services. If you accept or continue browsing, we consider that you accept their use Accept Read more
Privacy and Cookie Policy

This website uses cookies to improve your experience while you navigate through the website. Out of these cookies, the cookies that are categorized as necessary are stored on your browser as they are essential for the working of basic functionalities of the website. We also use third-party cookies that help us analyze and understand how you use this website. These cookies will be stored in your browser only with your consent. You also have the option to opt-out of these cookies. But opting out of some of these cookies may have an effect on your browsing experience.
Necessary Always on
Necessary cookies are absolutely essential for the website to function properly. This category only includes cookies that ensures basic functionalities and security features of the website. These cookies do not store any personal information.
Non-necessary
Any cookies that may not be particularly necessary for the website to function and is used specifically to collect user personal data via analytics, ads, other embedded contents are termed as non-necessary cookies. It is mandatory to procure user consent prior to running these cookies on your website.
SAVE AND ACCEPT
Scroll Up